10 Things You Need To Know In Technology Today

10 Things You Need To Know In Technology Today.

Here are the interesting and the top 10 things that are holding seats in technology that you need to know.

Technology as we know to be part of our everyday life, has made a great impact in the life of mankind as each and everyday, we live by using technological tools and gadgets to accomplish our day-to-day activities.

Today’s brief post is all about the top 10 things that you need to know in Technology today and ICT Catalogue is here as Ghana’s Passionate Tech Journal to bring you all you need to know. 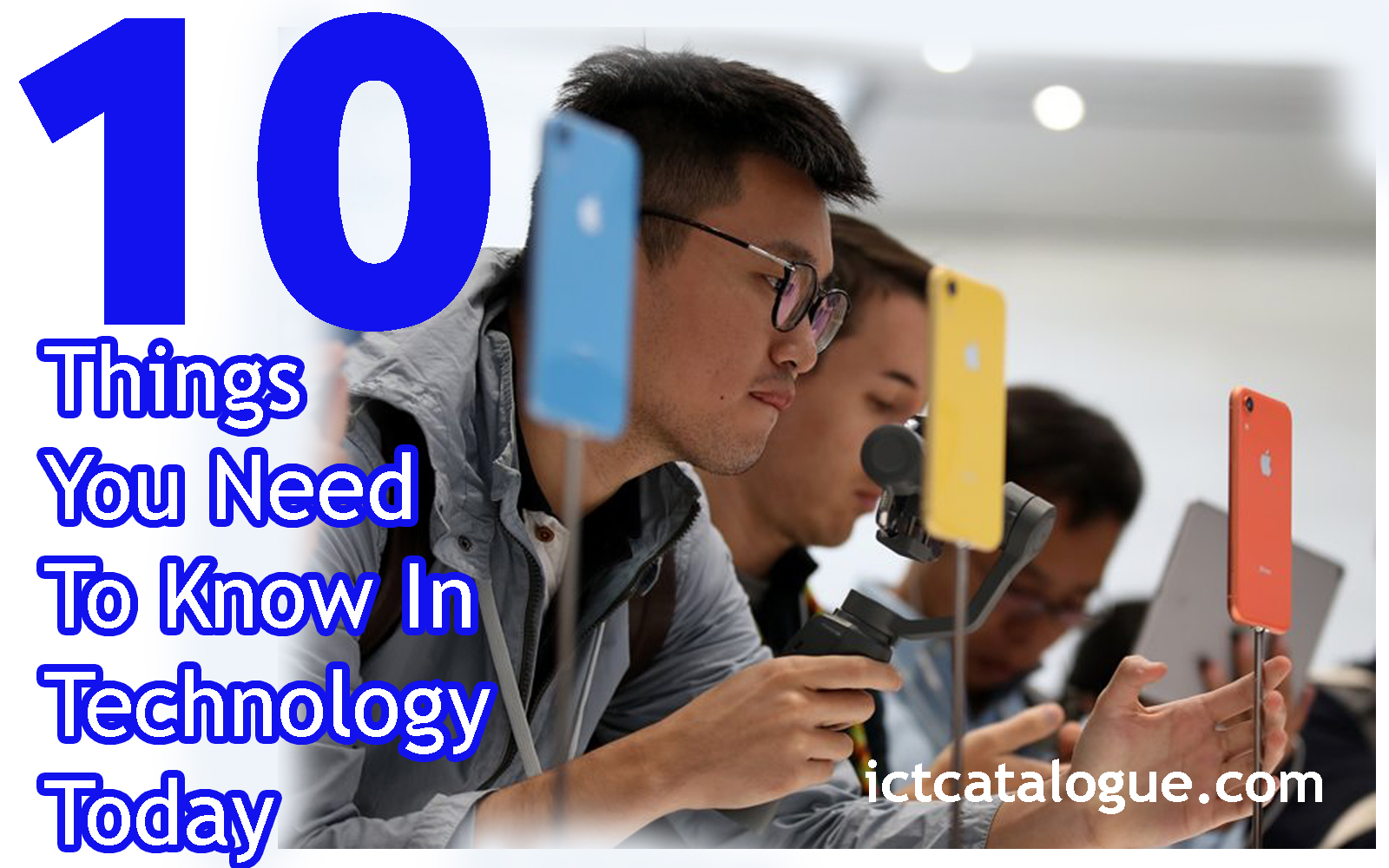 What you never knew is that, Google is building parental controls into Android that will let you limit how much time your kids spend on each android or smartphone app. The company previously offered such features as a standalone app called Family Link. Despite this, Google also unveiled a new augmented reality feature for Maps, but it’s only coming to Pixel phones for now. Using the phone’s camera, Google Maps will identify your location and place signs and arrows to show you where you need to go.

Here Are The 10 Things In Technology To Know Today

Google is “absolutely” planning about the foldable phones, the company’s Pixel chief in the person of Mario Queiroz stated clearly. According to Mario Queiroz , he said “For foldable phones to resonate with consumers, device makers need to come up with more compelling use cases”, and that’s going to make a lot of consumers fall in love with the devices.

One of the things from the top 10 things in technology you never knew is how Amazon brought the cashierless store in New York, but still has the option to pay in cash after a backlash. With this, the retailer faced backlash for its entirely cash-free stores, which critics said it discriminated against the customers who do not have a bank account.

With the story concerning Netflix, a former Netflix creative director got $1.6 million from big names in tech for a canned water startup called Liquid Death. With this startup, the funding was led by Science Inc, then joined by other tech notables that includes Dollar Shave Club founder & CEO Michael Dublin, then Twitter’s co-founder Biz Stone and Jen Rubio being the co-founder of Away.

The Korean smartphone giant, Samsung is cancelling the pre-orders for the $2,000 Galaxy Fold if it couldn’t make shipment from end of May. The device was then schedule to come out in the April, but due to the fact that several review units given to the media broke, Samsung Mobile pushed back the release date indefinitely.

Tesla cars can now find out and report which of its parts need to be replace and order news ones. To Tesla, he stated clearly that, “Our cars can keep tabs on certain components to let you know if they need replacing and order parts ahead of your next service visit.”

Lyft is partnering with Waymo to launch robo-taxis in Arizona. The cars are fully autonomous, according to Waymo, but they’ll still employ safety drivers to take over if there are any hiccups during rides.

The Lyft’s CFO said the year 2019 will be its “peak loss” year. Lyft reported its first quarterly earnings that showed accelerating growth in Q1 but also continued losses.

With this, Uber and Lyft drivers are striking in over dozen cities that are around the world on Wednesday. Many drivers report that their pay has consistently fallen in recent years and that they’re unhappy with their status as independent contractors.

One of the biggest tech trends to emerge in recent years is the Internet of Things. Simply put, the Internet of Things (abbreviated IOT) is the idea that all technological devices can be connected to the internet and to each other in an attempt to create the perfect marriage between the physical and digital worlds. How will this impact you? It depends on your industry. For example, for those who work in marketing, advertising, media or business management, IOT could provide a wealth of information on how consumers engage with products by tracking their interactions with digital devices. In turn, this data could be used to optimize marketing campaigns and user experiences.

Just remember when watching movies about virtual reality and thinking how cool it would be if it was actually like that in real life? Well, it’s about to be. Although VR has been around since the 1950s, until recently the technology wasn’t able to deliver the fully immersive digital experience users have been craving. That’s about to change with recent improvements to both hardware and programming, and the effects are going to be felt across almost every industry from retail to education.

ALSO READ:  How An Accountant Became A Tech Blogger In Ghana

How it’s affecting industries: Virtual reality has been a popular component of video games for several years and this trend is continuing to expand. In addition to video games, VR is likely to affect companies across the board as they adopt the technology to help them engage customers more effectively and optimize their sales and marketing efforts. It’s also a potentially useful tool for learning and is increasingly being adopted by educational organizations.

In summary, these are the best and top 10 things to know in Technology today and I believe you’ve found this post, 10 Things You Need To Know In Technology Today useful and would share with friends and loved ones via social media sites such as Facebook, Twitter and more.

ALSO READ:  How to Fix the BSOD Stop Code in Windows 10