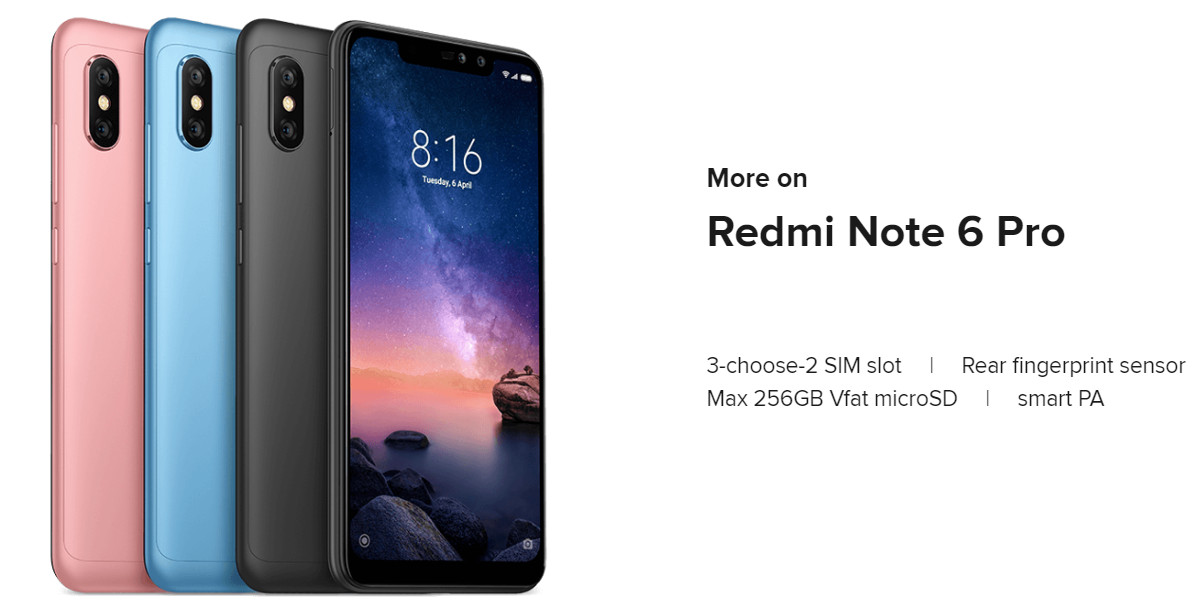 Recommended: Tecno Phantom 9: Check Out Its Specs And Features Before It Arrives In Ghana

The device has the power and volume buttons on the right side while the SIM card tray has been placed on the left side. Below is the audio jack and the IR blaster. There is a knock on the front side in the phone. Named the Redmi Note 6 Pro is like the iPhone X. There are two selfie sensors and a microphone in Noch. Radmi note 6 Pro has 4 cameras with 2 front and 2 rear sensors. Like any other smartphones in Shaomi, it does not have any hardware buttons and users can control the phone through the onscreen button or meui gesture. In the case of design, the company has not given anything new to the phone.

Shaomi Redmi Note 6 Pro has a 6.26 inch Full HD display with a resolution of 1080×2280 pixels. The phone has a 2.5-D good glass display and the aspect ratio is 19: 9. The phone has the Corning Gorilla Glass. As always, the Radmi Note 6 Pro has a brighter and vibration display. Users have the option of hatching Nokia. Enjoy watching movies, videos and TV shows on the big screen of the phone. Viewing angles are also great. Photos and text sharp on the display and colors are also fine. Overall, the display is good and the display experiences have been great in terms of this price segment.

Shaomi Redmi Note 6 Pro runs on Android 8.1 OSO operating system based company’s MUI 10 The company has made many customizations in the UI and with new features it enjoys Android 9.0 pie. For example, the notification panel is now in round shape, which is similar to the new Google Material Design 2.0 update. Google Search can be accessed by swiping upwards on the display. The app can be seen by swiping to the left. Apart from this, there is also ‘Xiaomi Guide’. From here there can be a lot of work, such as cash clear, making new notes, adding calendar events. Just like other smartphones in Shawomai, all the apps of Shaomi are already installed in Redmi Note Pro 6. There is no app drawer in the phone, which means that all apps remain on the home screen. The device also has dual app mode through which you can use an app with an account. The handset also has one-handed mode, which reduces the screen and makes it easy to use. In addition, the phone also has all the features of Android 8.1 Orio.

Shaomi Redmi is the only processor with the last variant in Note 6 Pro. It has 1.8 GHz Qualcomm Snapdragon 636 processor. RAM is 6 GB and inbuilt storage is given 64 GB. Users can increase storage by up to 256 GB via microSD card. During the review we saw that the phone is easily multitasking. Switch between apps is easy and there is no problem. Gaming Experience is also great We noticed that there is a problem getting hang while playing heavy graphics games. Apart from this the phone is also hot. The phone starts to warm up only after 45 minutes of playing games. We also used some editing apps and they also run well without any problems.

Speaking of audio performance, the audio performance of the Redmi Note Pro 6 is excellent. We heard different types of music and the sound was superb with headphones. However, the quality of the loudspeaker is average.

Overall performance of Radmi Note Pro 6 is good. In the phone, the company could offer a more robust processor. If you have Radmi Note 5 Pro, then Redmi Note 6 Pro is not a great option for you.

Shaomi Redmi Note 6 Pro offers two-two camera sensors on the front and rear. Smartphone has 12 megapixel AI dual camera with aperture F / 1.9 with LED flash. The phone has 5 megapixel depth sensor. Crisp and clear photos come in less light than the rear camera of the phone. Photos taken in indoor and low light are clear.

This is a review of Xiaomi Redmi Note 6 Pro and hope to bring you more contents about latest smartphones as soon as announced by the Mobile World Congress.
Don’t forget to share and spread this post via the various social media platforms that are available and also SUBSCRIBE to our news-feed for more. Review of Xiaomi Redmi Note 6 Pro on ICT Catalogue.